This is the most badass mountain of nachos I’ve ever had; well…at least since the first time I did it in 2004.

If you didn’t know, I love football.  I love sports in general but football is all I have time for anymore.  Although my team will likely never win it all, my friends and family create great memories every season rooting for our perennial loosers.   With football having a much shorter schedule than other sports, it allows fans to continually make “an event” out of most Sundays that would otherwise be delegated to house work…shmouse work.

Like most football fans, our fall and winter Sundays revolve around food and drinks.  Sometimes the food is easy and sometimes it’s a lot of work, but it’s always delicious and usually centers around a grill.  This years Superbowl party was no exception. 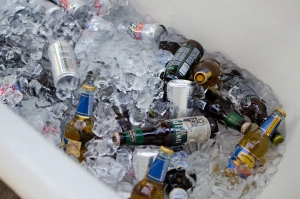 Since I didn’t do much cooking during the regular season we tried to go all out this year and get everyone involved.  And everyone DID get involved, it was beautiful.  We weren’t rewriting the book on anything, but when you attempt to do things properly and there’s a bunch of hungry people, there’s just a lot to do.

The event was around the nachos since 90% of the party had never been witness to such a thing.  Granted we’ve all had nachos before, but never like this.  I think we may have even missed the picture of just before the lid goes on which showed how tall the pile was.  We were actually gonna do two batches but just decided to go big on one.

What pictures cannot show is the depth of flavor achieved from the charcoal.  The BBQ smoke flavor permeates and the bottom gets all cheese fried crusty.  We of course fried our own chips, grilled the meat, made the beans and made the salsa.  The second batch was going to have some nacho cheese swirled in but we never got there.  I think this was all done during halftime.  How we pulled ourselves away from another mind blowing Super Bowl halftime show…I’ll never know :-|

Chrystal is a Local photographer and does an amazing job for any event.  http://chrystalcienfuegos.com — I highly recommend her boudoir shots for any woman wanting to give their husbands whiplash.  My wife took some and I’m still cleaning drool off the keyboard.