This year for superbowl, I was in charge of bringing nacho cheese.  As any culinarian would, my initial thought was making a Costco run for the liquid gold that is Que Bueno.  As I was about to head off and procure said unctuousnacho cheese, my new little toy from Modernist Pantry came in the mail.  Sodium citrate.  Derived from citric acid, sodium citrate is an emulsifying salt that makes cheese melting easy peasy and produces a stable product that can cool and reheat like american cheese.  For instance; I enjoy the texture of american cheese on some burgers and cheese steaks.  This salt lets me make that texture with any cheese I want.  So, blah blah blah, I made nacho cheese with a block of cheddar in a crockpot for superbowl.  The texture was good but I didn’t nail the taste of nacho cheese; too man 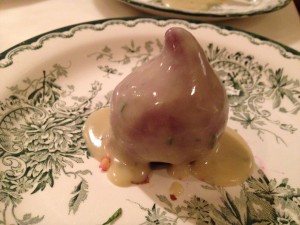 y cocktails and horseshoes got in the way.  The mission of testing the technique was however, a success.  A few days later I did a couple dinner parties where I could utilize this stuff.  It was a fun little side note and added interest factor for all of us.  Below are picks of what I ended up doing.  Roasted baby beet stuffed with toasted walnuts, pepper, parsley and shallots, then draped with a Gruyere or bleu cheese fondue.  It produced several distinct moans of pleasure and stretched eye lids to capacity.