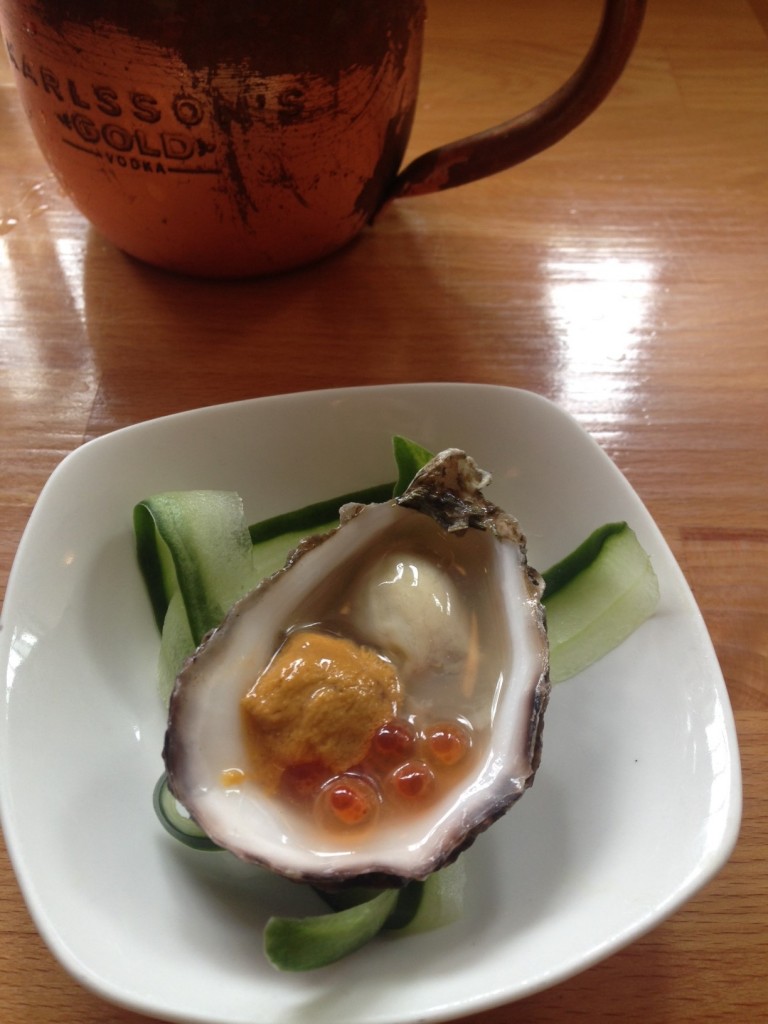 Looks good don’t it?  That my friends, was a wonderful bite we had in Oakland, at a place called Hopscotch.  Oyster, uni and salmon roe; it was like taking a bite of clean, buttery ocean.  I just wanted to show that pic because it’s beautiful.  What I wanted to talk about is what I found on my way to a dinner party.  Didn’t really know how to best utilize use ’em, but figuring it out is part of the fun.

What a cool little fruit, like sour lime caviar.  The pulp is separated into perfect spheres and is quite easy to remove.  I ended up making a “salsa” for some lamb meatballs, the caviar texture and look made it a great citric additive. 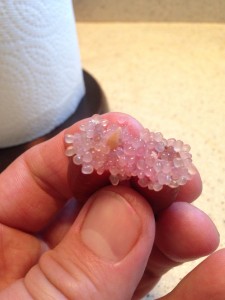 The one pictured has some pink rolling through but most are clear.  The skin is usable but powerful. 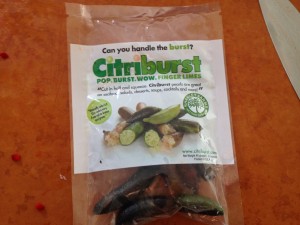 Another year and another Louisiana style crustacean boil.  I’ve now been a part of 5 boils, and I tell you what…it just keeps gettin’ better!

Big brother is the reason for the season

The big brother was visiting and we wanted to recreate our boil from 2013. Not only did we do it…we did it perfectly.  Well, the potatoes were a touch over done but everything else was ridiculous.  Following the same basic procedure as last time, but letting the crabs soak about 30 minutes less.  I liked that because the crab didn’t absorb too much of the boil liquid. Don’t get me wrong, the boil spice and flavor is great, but I don’t think it needs to inundate everything. There is plenty of spice to be had in the corn, potatoes and sausage.

As you can see from the pics, we went halvsies on the crab and cooked some lobsters as well.  Asian markets here have lobsters at around $9lb while the crab is $13lb.   Boy was it great to have both bugs.  I found the crab flavor more pleasurable but the large meaty chunks of the lobster were a big hit.
So, on a rainy December San Diego Saturday, 17 crab pickin’ amateurs got after it with the perfect amount of everything important.

Next time I’d like to make my own boil seasoning that is more representative of my home town.  Some amalgamation of California fresh with a Mexican accent. Not that I don’t love the flavors of the Southern style, I just want something that’s ours, something no one else has ever experienced.

Only slight changes to the original recipe posted in 2013.  We added the crabs, brought it back up to a full boil, covered and turned it off for an hour. The original recipe was to boil for three minutes and steep for an hour and a half. Which is too much  unneeded heat.