One day, while contemplating glutamate rich foods, I realized that Jack ‘n The Box Tacos were ridiculously glutamate rich. Mostly bad/unhealthy free-glutamate; but since it’s pretty much a “glutamate taco” anyways, (beef, soy, tomato and MSG). I realized that what I had been preaching for several years might have some scientific validity. That is, that Jack ‘N The Box Tacos are the greatest hangover remedy food in existence. Existence meaning that it is easily available down the street and inexpensive…and crunchy…and greasy, ahhhhhh drool, nom nom nom. 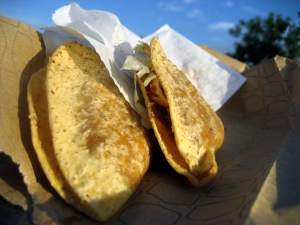 Every time I had a bad hangover, these little 50 cent bastards would bring me back from the dead…every…wait for it…time.  I always assumed it was just my greasy post drinking food of choice, but as it turns out, the glutamate dense snack food acts like a pit crew in an auto race. 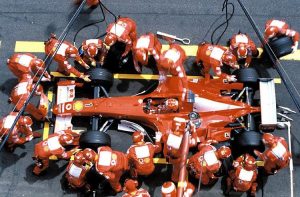 Stay with me here: Your body is the car and alcohol is the track. You’ll have fun racing, but you’re gonna get beat up, get a flat, spill some oil and run out of gas. To get back in the race you’ll need some gas (water) and new tires (stable head and stomach)Glutamate (the pit crew) assists your body in getting what it needs by facilitating hydration, balancing your brain chemistry and removing withdrawal symptoms. You can do all these things without added glutamate; but do you ever see a race car driver get out of his car to change the tires or fill up the tank? No, a pit crew is safer and more efficient.

What is your hangover remedy? Is it glutamate rich? All signs lead to yes…especially if your answer involves fast food.

Most of us know that the main reason for hangovers is dehydration. The higher concentration of blood alcohol you have, the less water there is in your blood, duh.
Another reason for hangovers is the effect alcohol has on your brain. Alcohol increases GABA activity and lowers glutamate activity. That means it increases a suppressing neurotransmitter, and decreases an excitatory; resulting in a double dose of depressant effects. Your central nervous system, heart/circulatory system, respiratory system, motor function, cognitive ability, learning, memory, is ALL suppressed; it’s a double-whammy.

While balancing out your suppressed brain function, glutamate also acts as a cellular hydration mechanism, whereby it can “trick” the brain into pulling in more water. This use is highly common among athletes and body builders for its hydrating effects on muscles—which then helps recovery time and growth.
This amazing hydrating aspect is what turned the light bulb over my head into this diatribe before you.

Disclaimer for lack of bibliography :-|
I got nothin’.  When it comes to concrete, documented evidence supporting my case, there isn’t much out there. But there are some companies selling GA based hangover cures, and I did do some pretty good field testing of my own. I had varied results because my controls were not strict enough; but one time (out of about three)…it worked like magic.
I already had the L-glutamine in pill form, as I’d been experimenting with myself and friends on random party nights. Results were always inconclusive, but never bad, and everyone seemed relatively good the next day; however, it was never clear that the glutamine was the reason.
So, like so many before me, I decided to put the burden and responsibility for accurateness solely upon my shoulders.
The mission ahead was detailed as such:
Glutamine pills…check.
Cheap liquor that assured a plate tectonic shifting headache… check.
I did drink a responsible amount of water, but nothing outside of what I normally would when partying.
While hanging out with family over a 3-4 hour period, I preceded to destroy around 3/4 of a 750ml bottle of Jim Beam, mostly mixing with a little Coke. I took glutamine before I started drinking, before bed and when I woke up in the morning. I think it was about 1g per dose (100mg). .
The next morning I felt absolutely fine. 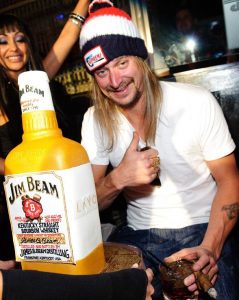 Overall, L-glutamine is an awesome supplement capable of doing ridiculous amounts of good for our bodies. I wouldn’t recommend it everyday (since water is the only thing we should have EVERY day); but I’d definitely use it when I’m feeling less then 100%.
Sidenote* for those who use alot of ibuprofen. Glutamine has been found to reverse some of the intestinal damage caused by non-steroidal anti-inflammatories,..just sayin’.

ALOT of scientific explanation was left out here; but I assure you, I researched a shit ton…ask my wife :-| She’s glad it’s all over.

I obtained my information through random research, self testing, talking with people smarter then me (they weren’t hard to find) and a ton of scientific journals on the web. Obviously I have no bibliography for this article, sorry about that. I gathered information over a long period of time and lost track of where it all came from, so take it as you will, I’m gonna go grind a taco now…gigitty.