Like many other American homes, chili is a Halloween staple here at the house. Since the beginning of time, my mother made her chili recipe every Halloween. The tradition has been continued by the kids since leaving the nest. Friends and neighbors all know there will be a crock of chili at the Halloween party. Even if there wasn’t a gigantic party, chili would still be made. And chili when it’s chilly, is always a good way to start the season.

Disclaimer: This post could have been 3 times longer. There are a lot of variables to chili that can be waxed on about. Even though this post is long winded…it’s just the tip of the iceberg.

Some have a chili recipe, and others have a secret chili recipe. Some open cans while others roast and de-seed whole chiles of unknown origin. Notice the spelling on the last chile. Being in Southern California, it has always been customary to use the Spanish spelling of the word. So a chile grown from a garden is spelled with an e. While chili in a pot, is spelled with an i. However it’s spelled; hopefully it’s being made every year or two. It’s a fun dish to make with innumerable varieties that are usually satisfying.

The worst thing that can happen with chili is making it bland. It can’t really be over seasoned, which is part of it’s fun factor. Well…anything can have too much of something, but it’s hard to over do it with chili. One seasoning that shouldn’t be omitted in a tasty chili is an umami heavy flavor.

Umami is a good decision

(Umami ?) Yes, It’s been covered on this blog before. Any memorable chili recipe has some form of earthen savory flavor, or glutamate; whether you’re adding it knowingly or not. This year it was in the broth; 3 cans of Campbell’s Beef Consumé. My wife had randomly bought it a month earlier because it was on sale and seemed like a good pantry item. Since it needed some beef flavored salt, those cans seemed like a win. Last year it was beef bouillon cubes; and the year before that it was a couple packets of Goya seasoning. Every year is different but it always helps the end product.

Musgo, is the way to go

Chili recipes in my house tend to follow the *musgo* model; which means they’re never the same. One reason for that is; once cooking has started, going back to the store for something is not in the playbook. It’ll get a work around in some fashion, or a trip to the neighbors. In food, there is always another option if you know where to look. Therefore, chili in this house changes year to year. As does mood, the timeframe or goal for the bowl. Last year was hectic so that pot was an experimentally simple version. No extra effort ingredients like fresh onion or garlic, whole chilies or bacon. Just ground beef, canned tomato product, bouillon cubes and dry spices. It was great! But this year was more layered and complex with some fun additives.

Chili is built for fun additives. Hot sauce, unexpected spices, chocolate, alcohol, varied meats and veggies. Then you have the option for toppings and all the complications they can bring. It’s really all beautifully endless.

Magic in the musgo

Musgo this year might be “must use again” next year. There was some frozen browned up beef fat trimmings and homemade hot sauce amalgamation; both of which will be hard to replicate next year. The browned beef fat was ground up in a food processor and added to the bacon to melt away. Another cool secret that is now “The way,” is grilling the meat. Fresh ground beef made into hamburger patties and grilled; just enough to get some grill flavor.

So if you have never made a pot of red. Carve out a day when you have some time, grab a soda and crank some tunes. Go get some chile, preferably when it’s chilly, and have some creative fun making chili.

*Whatever you have in the pantry or fridge that must go, or has been around for awhile.

5-7 California chiles, tops and seeds removed (use New Mexico for a spicy pot)

1/4-1/3c cornstarch, mixed with some water to dissolve

Form patties and season the meat with salt and pepper, then grill over flame driven grill, (not in a pan or grill where the flames don’t hit the meat). Also, start and continue with a hot grill. You are looking for lot’s of grilled flavor but not overly charred or burned burgers. You also don’t need it cooked all the way through. Afterward, let it cool and use your hands to break it up into the proper texture.

Cover all the seeded chiles and raisins with boiling water for 10-20 minutes, then puree everything in a blender.

Cook, render and brown the bacon. Before it gets too brown, add in the beef fat to toast. Add the cayenne to toast for 20-30 seconds then remove about 1c of fat from the mixture into a large sauté pan. Use that to sauté the onions until they are cooked though and a little browned.

Stir in the garlic for a minute or two then add the cumin. Cook, toss and stir for a minute then remove from the heat.

Put the bacon fat mixture back on the heat. Once hot, add the pureed chile. Cook as much as possible without destroying your stovetop from all the splatter. Any amount is good, but frying that chile a bit is best. Once your patience is gone, add in the onion mixture along with all remaining ingredients, sans the cornstarch. Cover with water by a couple inches and bring to a boil.

Simmer for a few hours and taste for seasoning, then stir in the cornstarch mixture and bring to a boil again. Stir while boiling to emulsify in the fat.

*Yes, add beans. Get outta here with the no beans in chili bs. Chili with only meat is a meat sauce or “chile con carne,” not a balanced bowl of love with varied texture and flavor. 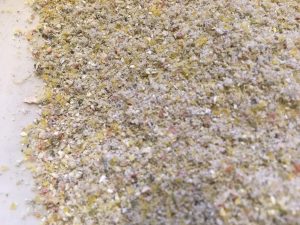 We joined a lovely CSA  last summer, run by some seriously solid human beans, Agua Dulce Farm of San Diego.  Kelsey and Ben sweat it out in Chula Vista, but also keep it hyperlocal as well when they started the Bancroft Center For Sustainability, which I’m fired up about because that’s ma hood. In our last box we received a bag of corn meal. 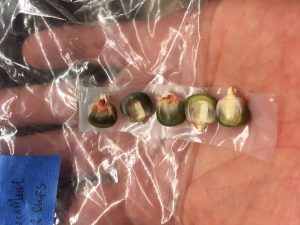 Oaxacan Green Dent corn to be precise. Already seeing a Facebook post about it, I knew what it was immediately but was still excitedly surprised. We mulled over how to use it because we really wanted to highlight the corn flavor. Not just use it…but really taste it. We settled on cornbread and it was a good decision. It had a lovely blue green hue and tasted like corn, not cardboard; I know, shocking! 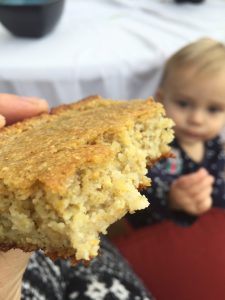 With our remaining corn meal we made Johnny cakes for breakfast. If you’ve never had Johnny cakes, they are cornmeal pancakes and they are rad.  Below is a recipe and some pictures for you to make your own. Do it, because they are super bomb-omb.

Whisk the water and cornmeal then let sit for a minute. Whisk in the oil, sugar, egg, salt and milk. Dust over the flour and leavening, stir until combined. Cook like pancakes with equal parts oil and butter…don’t skimp on the fat. and serve with something sweet.