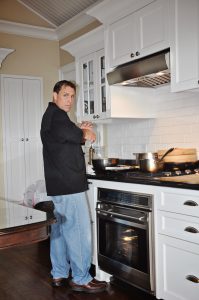 “…he fixed dinner for his family every night. It was a ritual he loved, but the ambition of his cooking was controlled by how good a day he’d had writing, and how good a run he’d had. If the writing went poorly, he took it out on himself with a long, hard run; or, sometimes, a bad day with his writing would exhaust him so much he could barely run a mile; then he tried to save the day with a splendid meal.

Helen could never tell what sort of day Garp had experienced by what he cooked for them; something special might mean a celebration, or it might mean that the food was the only thing that had gone well, that the cooking was the only labor keeping Garp from despair. “If your careful,” Garp wrote, “if you use good ingredients, and you don’t take any shortcuts, then you can usually cook something very good. Sometimes it is the only worthwhile product you can salvage from a day: what you make to eat.”

Interesting thought at the end there. How many times has a little homemade meal made you realize the simple pleasures in life? Something so basic, so primordial…so important. Because food is my thing; I obviously look at this quote from “The World According to Garp“ with a bit more weight…but it really is a polarizing thought.

If cooking is not your thing, and the thought of making a yummy dinner from scratch makes your blood run cold; all I can say to you is, get over yourself, and take a chance on the oldest ceremony in human history–feed your family, and yourself. Cooking is not just about eating, you are taking what the earth has given and making it a part of you.

Lets start simple:
It’s 5:30pm, you’re tired, everyone is hungry and not only is cooking not mentally an option, but dishes afterward? Ah hellll naw!
Take a deep breath…exhale, and walk into your kitchen. Do you have; salt, pepper (maybe a leftover packet of crushed red chile from last Fridays pizza), some oil or butter, a veggie or two (maybe an onion and a carrot or a bell pepper)? Maybe you have some protein somewhere…how about a few handfuls of nuts if there isn’t any meat. Our insatiable drive for meat really makes me giggle sometimes, especially with men. At what point did we get it in our heads that we’re going to waste away if we don’t fill our gullets with a 1/2lb (or more) of meat every night. “I don’t know how many times I here the line, “I need meat or else I…”, from people. Guess what? You don’t need meat! Not that I’m saying you shouldn’t eat meat…but a small mind shift toward other options might be a nice change. If you like meat cause it makes you full, try a handful or two of raw walnuts and half an avocado sprinkled with a little garlic salt and lemon juice.

But I digress; back to dinner. Get out that small plastic Ikea cutting board and your dull ass knife that hasn’t been sharpened properly in 3 years. Hack up the onion and carrot, throw it in a pot with a couple tablespoons of fat. Turn the heat to medium, add a three finger pinch of salt and a little pepper, (fresh ground of course). Add in whatever spice or dried herb you might have bought in the last three months and give it a stir. If you have any garlic now is the time; adding it too early can result in overly browned, bitter garlic.
Got any rice? Add that in as well, let it toast in the oil with the veggies and spices. Once you get bored with that or, everything looks a bit browned, add liquid to cook the rice…water is fine but add another pinch of salt..carbs love salt. Rice and liquid needs a 1:2 ratio. Bring it to a boil, cover and turn down to low for 15 minutes (40 for brown rice). After the 15, turn it off and let it sit for 5. Meanwhile, rummage around your kitchen to see what else you can add. Any frozen corn or peas? Some slivered almonds that only need a little browning in a dry skillet? How about a can of black beans or a can of olives? Maybe you have some leftover cilantro from taco night? Chop that shit up and toss it in.

This simple one pot 30 minute meal is doable; if you want meat, brown it up with or before you add the onions. For further assistance, shoot me a line…anytime.

For the record: I’m a total glutton that has never met a carb I didn’t inhale; and I’m not trying to preach about how you should eat…(well, maybe I am). But it’s a nice mindset to have on our continuing path toward a healthier, hopefully simpler existence.